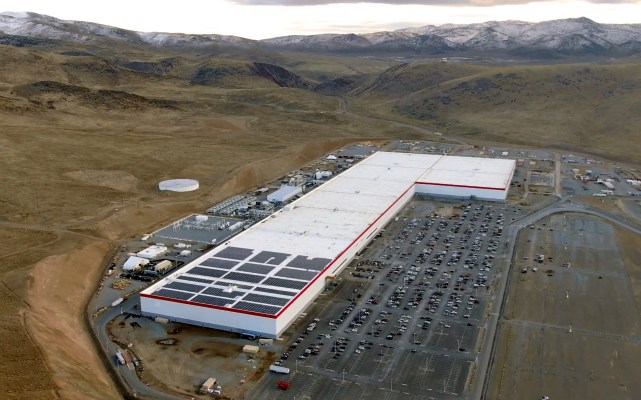 Panasonic is adding another production line to the massive factory it operates with Tesla in Nevada, an expansion that will increase battery cell capacity by 10%.

The Sparks facility, dubbed Gigafactory 1, is the centerpiece of Tesla’s plan to expand global battery capacity and reduce the cost of electric vehicles.

Panasonic has been its most important partner in that project, which, based on a recent agreement, should last until at least 2023.

Tesla and Panasonic initially planned for the Gigafactory to have the capacity to produce 35-gigawatt hours of batteries each year.

That goal was achieved with 13 production lines. This latest expansion, which was first reported by the Reno Gazette-Journal and confirmed by TechCrunch, will add the fourteenth line.

Panasonic said the additional line with creating the need to add 100 more jobs at the Gigafactory.

Construction has already started on the project, Panasonic told TechCrunch. As Panasonic adds this new line it will also continue to install new technology for the “2170” lithium-ion cells it produces and supplies to Tesla, a change that will improve energy density by 5% from the current cell and reduces costly cobalt content.

Panasonic is upgrading all 13 battery cell lines with production. The new technology will allow for continued improvement with energy density expected to improve by 20% over five years.

The increase in energy density in the cells means that Tesla will theoretically see the same gains in its packs, which in turn should improve the battery range in its Model 3 and Model Y.

The 2170 cells are used in the Model 3 and its newest vehicle, the Model Y. The reduction in cobalt content, a rare chemical element that is expensive and has social and environmental costs, could also help reduce the price of the cells.